ENJOY EXCLUSIVE DEALS AND BONUS DOG CONTENT THROUGH PAWSH'S MONTHLY NEWSLETTER!
They say a picture is worth a thousand words, but even that substantial literary quota seems inadequate to describe the beauty that lies in Sue Bird’s photography, because she brings something entirely new to the realm of pet portraiture.
Based in Stittsville, Ontario, Sue puts 10 years of photojournalism experience to work for her furry photo subjects. The result? Spectacular editorialized pet portraiture that is moving, artistic and above all, real. Sue’s exquisite animal lifestyle photography has frequented the cover of Dogs in Canada Annual on several occasions and earned her many awards, as well as the adoration of the local pet community. And it’s easy to see why.
When asked how she arrived at this unorthodox career path, Sue simply replies, “It was Lucky.” Lucky the collie cross that is; a loyal companion who accompanied Sue to college and watched over the early years of her budding photojournalism career. “She was the best travel buddy. We would drive the 401 together,” reminisces Sue fondly. “She was a really great dog and made me laugh a lot. We became great friends and when she passed on I was devastated.”
That’s when Sue became inspired to turn her passion and aptitude for photography towards a new niche market – dogs and their people. Then in 2006, tired of grueling newspaper shift work and wishing to spend more time with her daughters, Sue started her own business, determined to capture the magical bond that exists between animal and owner in ways that had never been seen before.
Subtle symmetry, strong lines and captivating textures occupy Sue’s photographic style, bringing forth an organic image that embodies a story and plunges beneath the aesthetic of outer appearances. “There are sections of your life that you think back to and remember by an animal, because they are a big part of us,” says Sue. “So to document your dog’s life is really to document your own. It is important to me that I tell the story of a family and that particular dog in every shoot.” Whether its frolicking in a field, playing at the beach, walking with a Mountie in the snow or lounging around in their favourite chair, Sue never fails to deliver striking images of canines, felines and equines alike that warm the heart and wag the tail.
The fact that her photo subjects now run around energetically on four legs and rarely sit still does not bother Sue in the least. In fact, she seems to thrive on the unpredictability of her subjects, because as she says, they always offer something new for the camera to discover. “When I worked as a photojournalist for major dailies it was my job to go into a situation that was completely uncontrolled and come back with a cover page worthy image,” reveals Sue. “The same principle applies when I work with clients and their pets. No matter how unpredictable the situation may be, I walk away from it having captured the moment in some lovely and unusual ways.”
Personalized bereavement packages are another special aspect of Sue’s pet photography that puts her ahead of the pack. When an animal is coming to the end of their life or suddenly taken ill, Sue makes herself available for emergency sessions so that clients can capture the essence of their beloved pet before they go. “So often we think that we have more time,” reveals Sue knowingly. “It is a shock to come back from the vet realizing that you only have a few days or weeks left. People wish they had more photos, more memories to hang on to. I find bereavement sessions to be very therapeutic for the client, even though people often don’t want to talk about death and what is coming.”
It is the extra care and compassion exercised in all her work that is making Sue well known across the country. She conducts shoots regularly in and around the Ottawa area, Toronto, Montreal, Victoria and even parts of the United States. No matter what the situation or environment, Sue discovers something special about any pet’s personality and captures who they are forever in a photograph that becomes an instant family treasure. To see more of Sue’s work, visit http://www.photobysuebird.com.
By Laura L. Benn 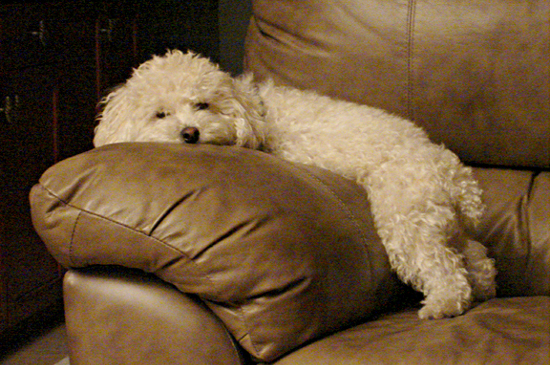 At first sight, Mr. Charlie Marley, a two-year-old Maltese Poodle mix, looks more like a stuffed animal than a real pooch. But when his little tail starts to wag a mile a minute and he bounces all over the place to greet you, there can be no mistaking his liveliness! A true angel, Mr. Charlie Marley is as good as gold, having only one instance of chewing one shoe when he was three-months-old (just a baby!) His greatest past times in life include playing fetch, snuggling like there is no tomorrow and playing with his 25 plush toys from sunrise to sundown.
However, Charlie knows the importance of balancing play with work, having modeled various dog harnesses and won many photo contests. His photograph was even published in the Palm Beach Post and he has aspirations of breaking into Broadway some day! A ball of love, this tiny 5lb fellow has a huge heart and is willing to share it with everyone he meets.
Congratulations Charlie Marley! October 2010’s Pet of the Month!

FAVOURITE GAME:
Tag! Tag! Tag! Chase me or let me chase you, it doesn’t matter! It’s all fun to me!

FAVOURITE TOY:
My stuffed animals — all 25 of them, because it’s impossible to choose! I also really like balls and will play fetch forever! (Seriously, I challenge you to keep throwing!)

MOST MISCHIEVOUS MOMENT:
It’s more like a mischievous marathon, if I’m being honest. I like to try and throw my stuffed toys behind the couch, down the side of the couch or push them underneath the couch out of reach. Then I have no choice but to cry for Mom to come and help me get them out again! Don’t ask me why… I mean, can you explain your mischief?

BEST TRICK:
When I was three-months-old, Mom tied bells on a string to the front door knob, then whenever nature called, I called Mom by ringing the bell to go out! Everyone was really impressed!

FAVOURITE THING ABOUT FALL:
Easy! My birthday and Christmas will soon be here! Maybe I’ll get a new stuffed animal for my collection?

CATCH PHRASE: I’m just so lovable… and I love everyone!

***
If you would like to nominate your pet friend for next month’s “Pet of the Month Contest,” please email submissions to info@pawsh-magazine.com 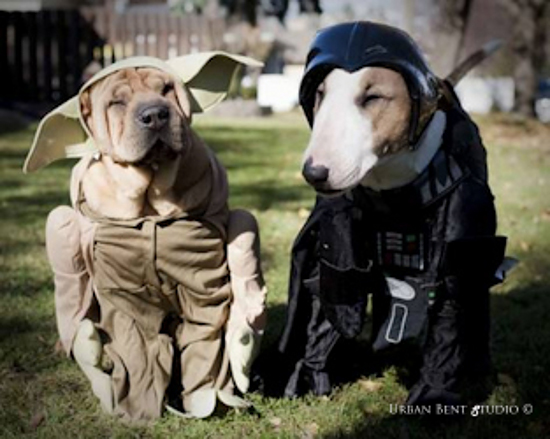 What makes a sensational costume? It’s ingenuity? It’s originality? Or it’s overall ‘aw’ factor? We think it’s a bit of all three, which was brilliantly captured by Buster and Suki this Halloween! Check out the amazing Star Wars themed attire that these pooches hit the streets in. Darth Vadar and Yoda are headed your way! Cute, are not they?
Another Halloween is on the horizon. The moon is bright, the pumpkin is carved, the house is decorated in true ghoulish fashion, and buckets of candy sit by the door awaiting trick-or-treaters. It looks like it’s going to be a fabulous evening of chills and thrills and everything is in place of a fun festive time. But just in case you were still wondering what to dress up as this year, we thought we would show off one or two more ideas.  So, here are a few extra cute costume inspirations that stole our hearts and are sure to make a statement at any Halloween function.
BUZZ! BUZZ! I’M A BEE!
A bee-uatiful alternative to vampires and witches, this bright and cheerful bumblebee costume is a lovely way to celebrate the season, but remember to watch out for the stinger!
HOT DOG IN THE CITY:
Your dog will be the hottest pooch in the neighbourhood with this adorable and delicious hot dog get up. The only question remaining will be ketchup or mustard?
PETER PAN & TINKERBELL:
You’ll be able to trick-or-treat from the ‘second star to the right, straight on until morning’ as Peter Pan and Tinkberbell. Just make sure you use Tink’s pixie dust to wish for lots of candy!
Happy Halloween everybody! And remember, send in photos of your amazing costumes to PAWSHmagazine@gmail.comThis e-mail address is being protected from spambots. You need JavaScript enabled to view it !