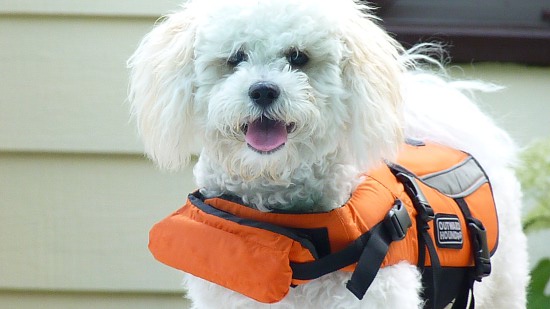 It’s the middle of summer – warmth, sunshine, and free time. What better way to spend it than at a cottage with your best canine friend? The water’s clear and warm, just begging you to jump in. Ol’ Spot, however, wants absolutely nothing to do with any of it.
Contrary to popular belief, and the deceptively named “doggy paddle,” not all pooches know how to swim! While a dog like a Labrador loves to be in the lake, many other dogs simply don’t have the size, strength or body fat to easily stay afloat. Don’t go and cancel your cottage getaway just yet, though! Just like for humans who’ve got some trouble swimming, there’s a solution for water-averse doggies: canine life jackets.
First off, here’s a refresher on the physics at play. Things float when they displace a greater volume of water (by weight) than they themselves weigh. So, something that weighs two pounds needs to displace two pounds of water in order to float. Two pounds of rock, being rather small, can’t push that much water, so it would sink like… well, a rock. Two pounds of beach ball, however, is much larger and can push enough water to float. Body fat is relatively light, compared to how much space it takes up. A plump pooch would have a much easier time floating than a very thindog, like a greyhound.
Floating is just half the battle – a dog needs to have a good paddle too. In order to push against the water, a dog has to have a large surface area on his feet. Some, like the Lab, have webbed paws which provide excellent water pushing power. Smaller dogs, and those without webs, have a much harder go at it. Imagine the difference between swimming with your fingers together and paddling with an open hand. Dogs with tiny feet have an even worse time – imagine swimming using only closed fists!
Now, just because your four-legged chum lacks the volume and foot-webbing needed for easy swimming doesn’t mean that he has to stay on shore and watch, forlorn, as you frolic in the water. Dog life jackets, ranging in price from $20 to $60 depending on size, are an easy and affordable way for your cute canine compatriot to enjoy the full cottage experience without worry.
Available in bright safety colours for visibility or designer patterns for style, these life jackets are specially made and fitted for dogs to provide a snug, buoyant fit. Most styles also have a sturdy handle on the back to help you pull your pup out of the water if need be. Outward Hound, RuffWear and Kyjen are three popular pet life preserver brands, but there are many others out there. Once they’re in their jacket, any dog from an Afghan hound to a Yorkshire terrier can swim with confidence and ease, and without constant supervision.
No one really thinks of dogs having a hard time swimming. The image of the happily paddling Golden Retriever is so engrained in the collective conscious that the idea of a pup struggling in the water isn’t even on our radar. A trip to the cottage is no fun for your pooch if they’re confined to dry land while all the excitement is happening in the water. Fortunately for our furry friends, these specialized life jackets let even the poorest four-legged swimmer enjoy the full cottage experience. So suit that doggie up and hit the road; the summer won’t enjoy itself!
By Alexander Bentley