ENJOY EXCLUSIVE DEALS AND BONUS DOG CONTENT THROUGH PAWSH'S MONTHLY NEWSLETTER!
While the irresistible scents of roasting turkey, warming shortbread and frothing eggnog linger in the air, so too does the perpetual worry of packing on a few too many holiday pounds. But what about the holiday weight put on by your pets? Although it tis’ the season for splurging and spoiling, when it comes to dishing out decadent pet treats, a lot of owners are barking up the wrong Christmas tree.
Rather than feed your beloved pooch treats containing unnatural preservatives and additives, which can be harmful to digestion and general nutrition, why not consider going to an all natural pet-bakery and getting some healthy gourmet goodies?
PET TREAT BAKERY
Founded by Carol Elliot in 2004, on beautiful Vancouver Island, Pet Treat Bakery creates high quality, natural ingredient, sweet treats fit for any furry friend.
To make a long story short, a little SPCA rescue dog called Spike is the reason behind Pet Treat Bakery. Spike refused to eat usual commercial treats, so one day Elliot’s daughter-in-law suggested baking for the fussy little dog. The resulting banana biscotti was wolfed down in two seconds flat.
Elliot continued baking for Spike and a few canine chums, using only wholesome chemical free ingredients, until something reminiscent of the “Twilight Bark” from Disney’s 101 Dalmatians happened. Demand for Elliot’s delicious pet savvy treats sky-rocketed and before she knew it, a bakery was born. Today, Pet Treat Bakery’s products are sold in 35 different shops and five veterinary clinics – and Spike is the company’s president.
“A lot of junk goes into typical pet foods and treats,” says Elliot sadly. ““When you’ve got a dog or a cat, you have to look beyond the price point, as you would with your children, and take a real look at what you feed them. If you wouldn’t put it on the table for yourself, don’t put it in your dog’s bowl.”
The philosophy behind Pet Treat Bakery is threefold. Firstly, treats have to be all natural. “Peanut butter has to be just peanut butter,” Elliot insists. “No chemicals that you can’t pronounce.” Secondly, treats have to be tasty. Spike always lends a paw with this process, although sometimes a difference of opinion occurs between official taste-tester and chief baker. “I hate liver pate, but he loves it,”chuckles Elliot, who guarantees Pet Treat Bakery’s products are safe for human consumption. And finally, treats have to be affordable.
Nowadays a lot of dogs have developed environmental and wheat allergies, so Elliot has modified several recipes to suit these otherwise treat deprived pups. The sumptuous ‘Sweet Potato Pie,’ for example, is made with no grains, no eggs and no dairy, so dogs with allergies can indulge. Dehydrated beef, bison and pork liver is also allergy friendly and contains no cholesterol.
Elliot warns,, however, that although her pet products are safe for human consumption, not all human foods are safe for pets, like chocolate. Onions can also be lethal to dogs, grapes, currants and raisins harm the canine kidneys, and some dogs have trouble digesting peppers.
“People should be especially careful about giving their dogs Christmas dips with an onion base or leaving chocolates on tables this time of year,” says Elliot. She recommends instead trying your hand at making some tasty Christmas Twisters.
BON-A-PET TREAT BAKERY
Emily Ho never dreamed she would start an all natural pet bakery, but while attending university a chocolate lab led her from paramedic studies to an entirely different path.
“This poor dog had every allergy in the book,” recalls Ho. “Including horrific ear infections.” When it seemed that all hope was lost and the poor fellow was going to have to be put down, Ho switched his food over to a raw diet and in just two weeks saw a significant change. “He used to have black tar leaking from his ear all the time, because of the infections,” Ho says. “But it cleared up after being on the raw food.”
A friend and Ho then came up with the idea to not only make dog treats look good, but to keep them healthy too. In 2006, Bon-A-Pet-Treat (BAPT) Bakery opened in Calgary Albeta. 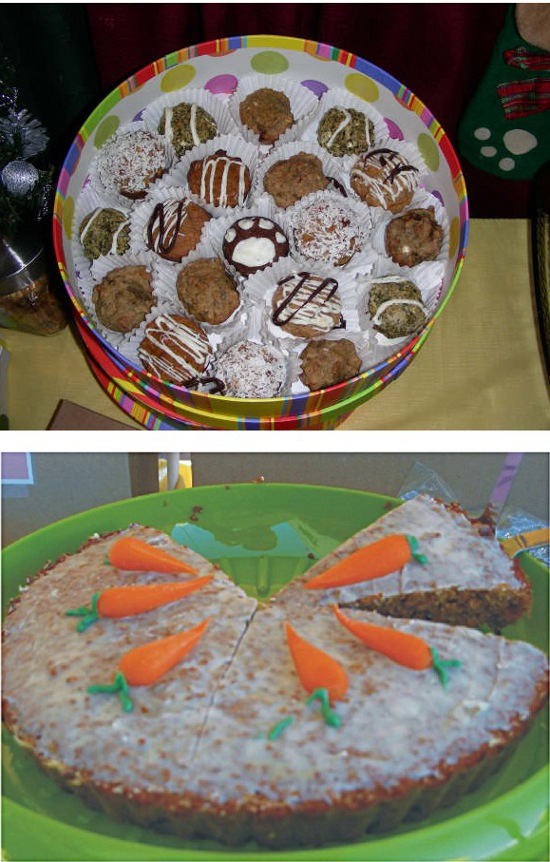 Everything is made from scratch, with the freshest ingredients. “We try to keep our treats looking good, but we don’t slather things in yogurt or over do it,” says Ho, a great believer that the taste should speak for itself. Entirely vet approved, BAPT’s products bring pet feeding back to basics. “It’s a whole food concept,” reveals Ho. “People are always looking for better ways to eat for themselves, so it only makes sense that we do that for our pets too.”
BAPT offers a wide range of unique products from the oh-so popular ‘Cheese Hydrants,’ ‘Peanut Butter Banana Bones,’ and ‘Honey Apple Bears,’ to a variety of Pup-Cakes, including mud-pie, carrot and brownie flavours. BAPT also produces adorable specialty gift baskets for milestone events in a pooch’s life. For example, there’s the “Nut’s I’ve Been Neuteured,” or “Congratulations on Your New Puppy” baskets – both filled with wholesome drool worthy delicacies.
When it comes to knowing what is good for your pet and what is harmful, Ho says, “just read the label. You should know what you’re getting and what you’re giving. You should be comfortable in knowing what is in a product, that cheese is actually cheese and not some flavour filled chemical.”
BAPT creates different novelty treats for every holiday and is sure to have an abundance of stocking stuffers in store this season.
SPOIL THE DOG BAKERY
What is Rachelle Jandard’s secret to spoiling dogs rotten and keeping them healthy? Slow baking.
“Every biscuit we make is baked slowly to retain the nutrition of the ingredients,” says Jandard, owner and founder of Spoil the Dog Bakery, in Guelph, Ontario. “Most large companies can’t take the time to bake slowly and instead blast their biscuits at about 1200 degrees Fahrenheit, which cooks a lot of the nutrition right out of the product.”
Jandard bakes at an even 300 degrees Farhenheit, no higher, no lower. She also does not grind the flax seed she uses (an excellent source of Omega-3, which is great for the skin and coat), once again preserving as much of the fundamental nutrition and flavour as possible.
Jandard was inspired by her now nine year old dog, Moka and a desire to give her canine companion only the best, after realizing she had no idea what the majority of ingredients were in typical dog treats.
A great deal of research and trial and error later, Jandard developed a few recipes and started giving them out amongst friends. A few months later Global Pets caught a whiff of what was cooking and propositioned Jandard about wholesaling. Spoil the Dog Bakery now supplies 100 locations with hand-made gourmet, nutrition packed pet indulgences.
Spoil the Dog Bakery refuses to bake with corn, wheat, soy, salt, suger or any artificial preservatives, preferring to use as many organic ingredients as possible for increased flavour and nutrition, and to support farmers who are attempting to help the environment. The primary base in Jandard’s culinary concoctions is the humble chickpea, very high in calcium and low in calories, and safe to eat for wheat allergy sufferers.
Fashioned into cute little shapes, including stars, maple leaves, flours and donuts, these gourmet treats pack quite the nutritional punch, winning praise from veterinarians, pet owners and, of course, the pets! Spoil the Dog Bakery also cooks for the fussy felines of the world, and, as of this year, horses too!
***
There are even some simple healthy snacks you can start feeding your dog today right at home. Carrots are a terrific low-calorie snack, as are apple slices. Oatmeal is easy enough to whip up and provides essential amino acids, while being a great source of fibre and iron. Even garlic can be chopped up and given as a rewarding tid-bit, to help cleanse the blood, prevent pesky fleas and boost the immune system.
So this holiday season, why not treat your pet the way you would want to be treated? With a delicious mouth-watering snack, that also happens to be good for you.
By Laura L. Benn

The products, topics, recipes and designs that are featured on this blog are intended as a source of enjoyment and inspiration. Pawsh Magazine & Studio retains no responsibility for any harm, injury or accident that may occur from choosing a product, activity, recipe or design from this site. Pet parents and responsible owners should always exercise due care, research and precautions for safety/health when selecting products intended for use by their pets, and always consult a qualified veterinarian before making changes to their pet's lifestyle.
© 2020 Pawsh Magazine, a subsidiary of LLB Creative.