It’s official. Yoga has gone to the dogs – quite literally! A new exercise trend stretching across North America, called doga (that’s right, dogs and yoga), is encouraging people to bring along their canine pals when they hit the studio for some downward dog relaxation. The practice is believed to have originated in Manhattan about 7 years ago, with the intent of nurturing the bond between dog and owner. As well, doga is meant to help keep bodies – human and furry alike – lean and limber, while maintaining positive mental energies. 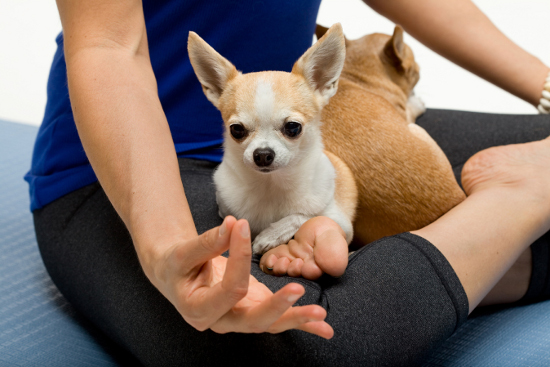 Becky Solomon, group exercise director for the Lakeshore Athletic Club at the Illinois Center in Chicago, runs the ‘Paws and Flow’ class. She says it is difficult to fully describe doggy-yoga. “A lot of it is about the experience,” she tries to explain. “It’s a combination of socialization and stretching for the dogs, as well as a lot of energy work and meditation for the people.”’

DOGA FOR THE PUPS AND THE PEOPLE

Paws and Flow’ is as much a training session for the people as it is for the pups. “There’s a portion of class when you’re not allowed to command your dog. Even if they’re barking their head off,” Solomon says laughingly. “It’s practice for the owners to control their reactive nature, so they can remain in a calm atmosphere during chaos.”

What else happens during a typical doga class? After a ten minute bouncy meet and greet where dogs are allowed to mingle with their classmates, soothing music oozes from a boom-box, everyone gathers in a circle on mats, and class begins with breathing exercises. Of course, dogs are not expected to perform all or any of the classic yoga moves, but instead enjoy a bit of massage and simple gentle stretches. 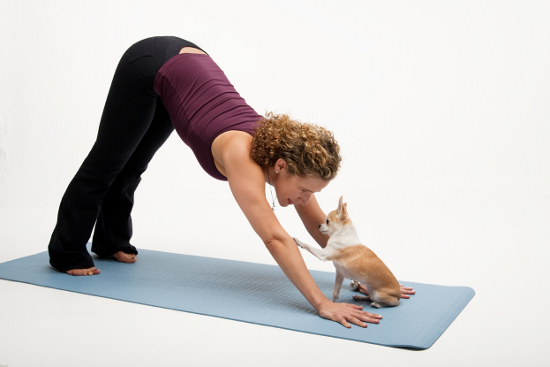 “Dogs instinctively do ‘upward’ and ‘downward dog’ yoga positions when they wake up,” reveals Solomon. “So in class we try to encourage that natural behaviour. This is because it feels good for them and is good for them.” For the most part, however, dogs are used as props by owners during more intense yoga moves. Dogs are also encouraged to lie by their masters’ side, or curl up in laps as class progresses.

“Dogs can sense and feel your energy,” insists Solomon. “They take on the energy of the owner, so we focus on calm movements and breathing to get the dogs to chill out.” Thus, an opportunity for owner and pet to bond through some intimate one-on-one time is created.

DOGS AND YOGA ISN’T FOR EVERYONE

As doga grows in popularity, however, so too does the voice of criticism. There are concerns about the hybrid activity being just another example of half-hearted multitasking in our fast paced digital age, and that it is single ‘paw-ed-ly’ reducing the ancient practice of yoga to just a new trendy craze.

“Sometimes it’s hard to fit everything in with a busy schedule,” admits Solomon. “But people love their pets and you still want to have that bonding time with your dog.” Combining yoga and time with your pooch is not so different then going for a walk or jog together. It’s just a quieter experience.

“At a dog park there are constantly people coming and going, so a dog is always on alert and doesn’t have a moment to relax,” Solomon says. Doga is all about achieving true relaxation and having a real uninterrupted connection with your dog. Some may say that the idea is similar to mothers toting babies to a yoga class, except there is a lot more fur involved. There is a little bit of yoga practiced, and a lot of holding what you love close.

A WAY OF LIFE

“With pets it’s unconditional love they give,” says Solomon fondly. “In class I suggest thinking about how you are in your relationship with an animal and how to carry that feeling into your life, so you can have that affect on other people.” For Solomon and her two chihuahuas, Chloe and Cubbie, doga has become a way of life, a way to stay connected and a way to teach others about the importance of taking some time – a 45 minute class to be precise – to just breathe, stretch and cuddle.

Although presently unavailable in Canada, doga is becoming increasingly popular within the United States and expected to dig its claws into Canadian workouts in the very near future. What a fun dog-friendly workout option, right?

{CREDITS: Photography by By David B. Sutton | Leading image via}