If you were perusing British newspaper headlines in 2002, you may have come across the story of Bramble the dog. Bramble, who had recently celebrated her 27th birthday, was then considered to be the oldest living canine in the world. While any dog living to be 189 dog-years-old is remarkable, what had many pet owners talking was the fact that the border collie had been fed a strict vegetarian diet since the age of two. Her story sparked a conversation about dogs and vegetables.

THE VEGETARIAN TREND AND DOGS AND VEGETABLES

Be it for improved health, environmental reasons, or ethical beliefs, more and more Canadians are choosing a vegetarian diet. Dietitians of Canada estimate that four per cent of Canadian adults currently eat meat-free, and this number is increasing steadily.

Many vegetarians are looking beyond their own diets, however, and asking whether it is safe and healthy for their pets to go meatless as well. But according to Ellen Munro, a veterinarian technician at the West Carleton Animal Hospital, it is not just vegetarian pet owners who choose a vegetarian diet for their dogs.

“The most common reason for dogs being fed vegetarian diets is allergies, often skin sensitivities to the protein source,” she says.

Donna Rafalski, manager of the Natural Pet Foods in Ottawa, has seen a rise in vegetarian dogs in recent years. She notes that owners are turning to vegetarian diets for health reasons more so than ethical ones. Like Munro, she sees a few dogs that are vegetarian because their owners are vegan. However, they make up a very small percentage of her vegetarian customers.
“Dogs often have reactions to the animal byproduct protein. So owners need to find other protein sources, such as vegetarian diets,” says Munro.

DOGS AND VEGETABLES CAN BE TRICKY

While there is some anecdotal evidence, like Bramble’s story, that suggests pets can thrive on plant-based meals, feeding your pet a veggie diet can be very tricky. It requires careful planning and monitoring by you and your vet. After all, not all vegetables are safe for our furry friends. 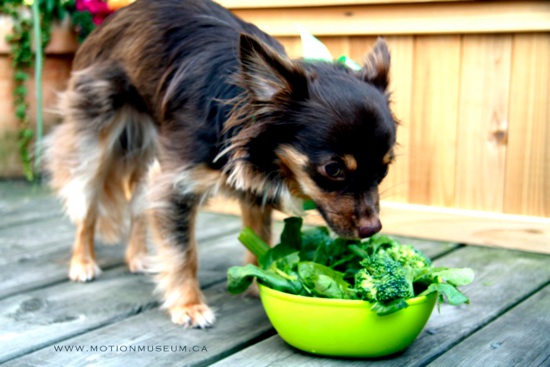 Dogs, like humans, are omnivorous and thus have an easier time becoming vegetarians than cats do. Their nutritional needs are less strict and many of the nutrients they get from meat can be found in plant foods or supplemented.

That being said, some veterinarians suggest waiting until after puppyhood to make your dog’s diet meatless. Getting the nutrient balance just right during the development and growth stage is a tricky business, and getting it wrong can seriously jeopardize your pup’s health. A plant-based diet may not be a great choice for a pregnant pooch either.

As a further challenge, many plants and veggies are unpalatable to dogs. If a dog has been raised thus far on a meat diet, the change to veggie meals will have to be a gradual one.

According to PETA, the critical nutrients to monitor for a dog are protein, calcium, and Vitamin D. Additionally, the amino acids L-carnitine and taurine. Deficiencies in these nutrients can result in a life-threatening heart condition.

Cats are a very different matter altogether. Felines are considered ‘obligate carnivores,’ meaning that the nutrients they glean from meat are absolutely critical to their health. Especially crucial nutrients are vitamin A and taurine, which are involved in hearing and sight respectively, and are extremely difficult for cats to synthesize from plant sources.

At the West Carleton Animal Hospital, Munro has not encountered vegetarian cats. “We also don’t seem to see many food allergies in cats. It’s primarily an issue with dogs,” Munro states.

Mindy Bough, senior director for the American Society for the Prevention of Cruelty to Animals, told ABC that she has heard of healthy vegetarian cats, but that she suspects that many felines who are being fed vegetarian diets are in fact supplementing these by hunting on their own meat.

While nutrient supplements are available for vegetarian cat diets, a 2001 study on pet diets found that even cats who had received taurine supplements were still dangerously deficient in this amino acid. Rafalski echoes this study’s findings. “Dogs can be vegetarians. Cats cannot,” she asserts.

CONSULT WITH A VETERINARIAN

Whatever your reasons to convert your pet to a plant-based diet, it is crucial to do your research and consult your vet extensively before making any changes to their diet. Be prepared that a veggie diet may not be a feasible option for a pet with special conditions. Once you get the okay from your vet, you can set your sights on beating Bramble’s record.